Kunal Kamra is known for his jokes on politics, the current government, and social issues.

Comedian Kunal Kamra’s Gurgaon show scheduled for later this month has been cancelled by the club that was to host it, after some right-wing organisations threatened to protest over his jokes allegedly “insulting Hindu gods”. This comes just two weeks after Munawar Faruqui’s shows in Delhi were cancelled, too, over similar reasons after police denied permission.

The Vishwa Hindu Parishad and Bajrang Dal wrote earlier today to the Deputy Commissioner, demanding that the show — two slots each on September 17 and 18 at Studio Xo Bar — be cancelled.

While the district administration did not say anything, Sahil Dawra, general manager of Studio Xo Bar, told local reporters, “Two men from Bajrang Dal came and threatened to disrupt the show. We have decided to cancel as we don’t want trouble.” 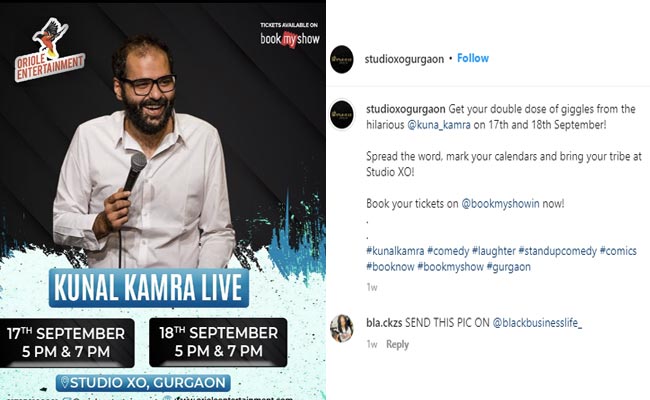 The since-deleted Insta post by the Gurgaon club that was hosting Kunal Kamra.

Kunal Kamra, meanwhile, put out a tweet responding to the demands for cancellation, questioning the allegations. He said those who claim he makes fun of “our culture” and “our deities” have no evidence.

He makes fun of our culture we claim,

He makes fun of our deities we think,

We have no evidence but his show disrupts our peace,

So what should the authorities do?
(UPSC question 10 marks) https://t.co/wQMgRfXHEE

“So what should the authorities do?” he asked in the tweet. He did not respond to direct queries beyond saying he didn’t know anything about cancellation having been decided.

Mr Kamra is known for jokes on political and social issues, and often takes digs at Prime Minister Narendra Modi and the BJP, besides other parties. A vocal supporter of recent protests against the government, he has been facing police cases, besides show cancellations.

Last year, his shows in Bengaluru, Karnataka — a BJP-ruled state like Haryana, where his Gurgaon show has now been cancelled — did not get permissions.

In an Instagram post about the Bengaluru cancellations, he’d cited two reasons: “Firstly, we didn’t get special permissions to seat 45 people in the venue that can seat more. Secondly, threats have been made to shut down the venue if I were to ever perform there. I guess this is also part of the Covid protocol and new guidelines. I suppose I am seen a variant of the virus now.”

He is one of several comedians facing anger from Hindutva right-wing outfits.

Munawar Faruqui, who is from Gujarat, has had to face cancellations, cases and worse — including a month in jail in BJP-ruled Madhya Pradesh — over his jokes on religion, politics and other contemporary, contentious issues.